Skip to content
You are here
Home > Event > DEATH NOT ONLY BY GAS TRAGEDY BUT ALSO BY ERRONEOUS MEDICATION
Bhopal gas tragedy, termed as the world’s worst industrial disaster, killed over 15000 people and more than five lakh people were affected. 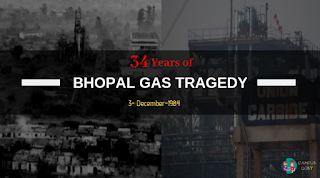 Any bells ring when someone raises a question about gas tragedy? The first thing that strikes our mind when said gas tragedy is – “Bhopal gas tragedy”.
A doubt might occur that why do we have to discuss it when it is done long back?
If it is that so, we are wrong because the incident which took place on December 2 – 3 in 1984 which killed an estimated range of 8,000 people due to the massive leakage of Methyl Isocyanate (MIC) gas from the Union Carbide plant within 2 weeks and affected more than five lakh people and to mention, it is not stuck to that bound itself, it has reach far beyond and is still continuing to take lives of the innocent people even after 34 years.
Bhopal tragedy is said to be the biggest industrial disaster in terms of loss of human lives. The tragedy, for the first time, made people aware of the magnitude of a peace-time calamity and the impact of this tragedy has become horrific.
There are facts that are still made unknown to the public and the facts that are buried in the secret files and the reality of the present day is disturbing and is to be taken aback. More than 700 documents accessed from the Prime Minister’s Office during Rajiv Gandhi tenure reveals horrible relief and rehabilitation measures including the horrible administering of wrong medication to the victims and a dysfunctional administration.
Particularly, the confusion over the medicines led to a serious impact on the people causing death. Several medicines got changed amidst the treatment. It was alleged that instantly after the tragedy struck Bhopal, a doctor from Germany rushed to the grief-stricken city. He advised that the gas affected victims should be given Sodium Thiosulphate. The drug had the desired impact. But, within a week, government doctors as per recommendation from the Central Government on 11 December 1984 decided against it and instead steroids and bronchodilators were recommended. Almost three months later in March 1985, the government reversed the treatment by recommending Sodium Thiosulphate injection. But, it was disrupted again in June 1985. It was a callous decision and only 5 percent of the population could be given the right treatment. The then health secretary Sarla Grewal wrote on 18 March 1985 that “long-term complications were difficult to predict, though, rejecting the reports about victims losing their eyesight”.
The government and bureaucratic apathy were colossal. Everyone was totally clueless by not being prepared to tackle the situation and play down the impact.
“This action included arrest/harassment of the doctors, confiscation of medical records and equipment and closure of the health center.
There has also been a note that said that “there is no doubt that (the) UCC owned and operated the Bhopal plant. The UCC was responsible for the designing of the plant and had warranted that the design was based on best manufacturing information available; and that they would provide the plant with the best and most up-to-date technical data and information in its possession for the manufacturing, processing, handling and storing MIC. There are several major flaws in the design of the Bhopal MIC plant, vis-à-vis the Institute plant, Virginia, particularly on the safety aspects and installations. The MIC as a chemical is extraordinary toxic and inflammable. It is one of the most dangerous substances known to man. One would expect a large multinational such as UCC, to offer the best and most up-to-date technology available with them and not dilute them when it comes to developing countries. The theory ‘they are not as good as us’ is pernicious and not acceptable,”
This whole tragedy was centered on one man Warren Anderson who was allegedly assisted by Rajiv Gandhi government to escape from the law and the secret note which was divulged by Ministry of Chemical and Fertilizers under Gandhi’s administration squarely blamed Anderson and team for the biggest disaster.
The corporation did not even take the concern to supply the information it possessed on the serious damage that could be caused to human and animal population, even at low concentration of MIC in the air. No details have been given yet by the corporation of remedial and therapeutic measures that could be taken in the case of affected persons.
Even after more than three decades, the state government is struggling to provide a healthy environment to the survivors and is still neglecting to take preventive steps regarding the disaster and thus leading to take the lives of many till date.